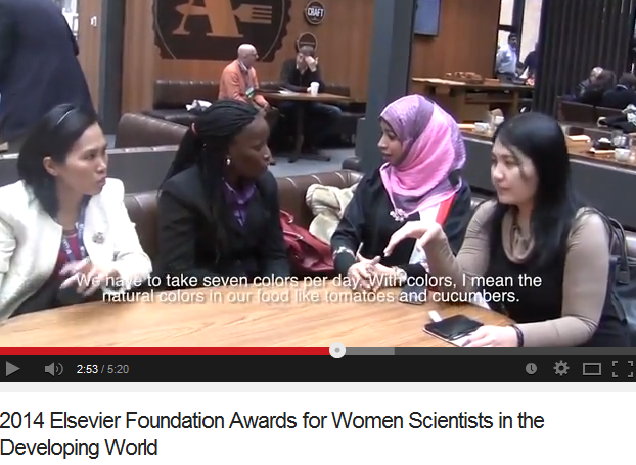 In 2014, five talented researchers representing five regions of the developing world came together at the American Association for the Advancement of Science (AAAS) Annual Meeting in Chicago to be recognized for their work.

The 2014 chemistry winners had impressive accomplishments in applying the chemistry of nature to pharmaceutical science, and for 2015 awards the Elsevier Foundation is looking for talented physics and mathematics.

The deadline to nominate brilliant women scientist is October 17th, and will be reviewed by a committee of eminent scientists representing the five regions in the discipline selected

The ceremony will be held at the AAAS Annual Meeting in San Jose, California. Winners will be granted a cash prize of $5,000, and a year’s access to Elsevier’s ScienceDirect and Scopus, the world’s largest abstract and citation database of peer-reviewed literature. In addition, this year the Abdus Salam International Centre for Theoretical Physics (ICTP), based in Trieste, Italy, is offering each of the winners free attendance and accommodations at one of ICTP’s workshops and conferences.

The Elsevier Foundation Awards for Women Scientists in the Developing World are granted annually by The Elsevier Foundation, the Organization for Women in Science for the Developing World (OWSD) and The World Academy of Sciences for the advancement of science in developing countries (TWAS) with the aim of building scientific strength and advancing scientific knowledge in developing countries.

Read more on 2015 call for nomination.