Against All Odds: Women in Developing Countries Succeed in STEM Fields 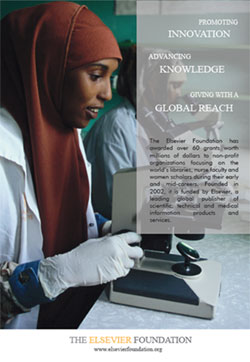 They’re seeking cures for cancer and other diseases, and proving that women can excel in fields once forbidden to them.

In August, Susan Brink of US News & World Report  interviewed the 2014 winners of the Elsevier FoundationAwards for Early-Career Women Scientists, which annually recognize excellence in research achieved by scientists in Africa, the Middle East, Asia, Latin America and the Caribbean. The awards are jointly offered by the Organization for Women in Science for the Developing World (OWSD) and The World Academy of Sciences for the advancement of science in developing countries (TWAS).

Against all odds, Simone Badal McCreath dreamed of being a physician. Her mother had left the family when she was young. She and her stepmother didn’t get along. She grew up in a poor community and no one in her family had ever gone to college.
“This is the developing world,” she says from her home in Jamaica. “You have challenges.”

[…]  “In sciences, academia and research, there’s value in recognition,” says David Ruth, executive director of the Elsevier Foundation. “Women are an untapped resource in the developing world.”

Read the full article in US News & World Report