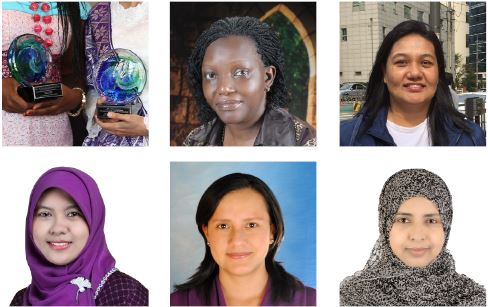 In recognition of research with strong potential for health and economic benefits, five researchers have been named winners of the 2016 Elsevier Foundation Awards for Early Career Women Scientists in the Developing World.

The winning scholars – from Indonesia, Nepal, Peru, Uganda and Yemen – will receive their awards February 13 in a ceremony at the Gender & Minorities Networking Breakfast at the American Association for the Advancement of Science (AAAS) Annual Meeting in Washington DC. They will also serve on a panel at the Global Women’s Institute at George Washington University at 3:30 pm February 11.

The Elsevier Foundation awards are given in partnership with the Organization for Women in Science for the Developing World (OWSD) and The World Academy of Sciences (TWAS) for the advancement of science in developing countries. The program rotates annually between disciplines (medical/life sciences, chemistry and physics/math). These year’s women are being honored for their accomplishments in nutrition, psychiatry, biotechnology, women’s health, bioenvironmental sciences and epidemiology. They are also being celebrated for mentoring young women scientists who are pursuing careers in agriculture, biology and medicine.

The recognition is intended to invigorate the winners’ careers by giving them new visibility and networking opportunities, allowing them to engage with colleagues and the public early in their careers. The winners also serve as a source of inspiration for other women in countries where more scientific expertise is a critical need.

Read the full article about the Elsevier Foundation Awards for Women in Science and find out who the winners are: